It’s been a while since we last came with a Spooked update. We do acutally have good reasons for it. Here is our excu… I mean reasons:

In this post we want to tell you about our decisions regarding the amount of levels and how we build them. It’s a bit scary showing placeholders and debug info, but we decided that we wanted to show you what happens behind the scenes. We also have some news regarding our Epocu campaign.

When you make games you often have to ask yourself some difficult questions. For us one of these was:

“How do we create many new and fun levels with the time and money we have?”

The answer was pretty clear: “We can’t!”

We know that we would end up with many underdeveloped levels and a much higher chance for bugs to slip trough.  Combined with our philosophy that we don’t want to create something that we wouldn’t buy or play ourselves we decided to go for four levels. This enables us to create a polished game that we feel is worth the money people (hopefully) will pay for it.

When we create a level we start of with a lot of empty objects with differnt colors. They aren’t pretty to look at, but they allow us to work on gameplay and mechanics even if the graphic artists are busy with something else.

Here are some examples from the prototype:

We still work by the same method; get placeholders and the functionality of the game up and running. In many ways Spooked is already done, and over the next months we will tweak  the gameplay, making sure the graphics have the visual standard we want, adding juice effects and so forth. Below you can see a screenshoot a recent Spooked build.

As you can see we lack graphics and we display a lot of debug text. Just as the placeholder graphics it doesn’t look pretty but it does let us develop the game without having to wait for a certain piece of graphic or animation. And it makes it a lot easier to see what goes wrong so we can report bugs.

Our goal is to remove as many bottlenecks as we can so that everyone can continue their work without having to wait for assets, sounds or animations.

For us Epocu started out as a marketing training ground. Now we can say it’s been a huge success for us. We have reached far past our goal and are now up to 176% with a social reach of 37.293!

But it doesn’t stop there. Early in October we got contacted by a potential publisher wanting to release the game with us. We haven’t decided if we should go for it or not, but regardless it’s fun to see that people like what they see and that they think we have potential.

More updates on that later in September!

Yesterday we passed 200 followers on Facebook. Not a big number but the steady increase inspires us to push harder to create a fun game that we can be proud of.

Still we want more exposure. With this in mind we decided to launch a campaign on epocu.com in hopes that more people will notice our game and support us. If you are reading this I hope you also take the time to click on “Add support” buttons on the page to help us reach our goal.

We want to thank everyone that have chosen to follow us from the beginning. In celebration we want to share some concepts of the priest with you. We are working on a lot of in-game assests and you’ll soon get some juicy screen shots. 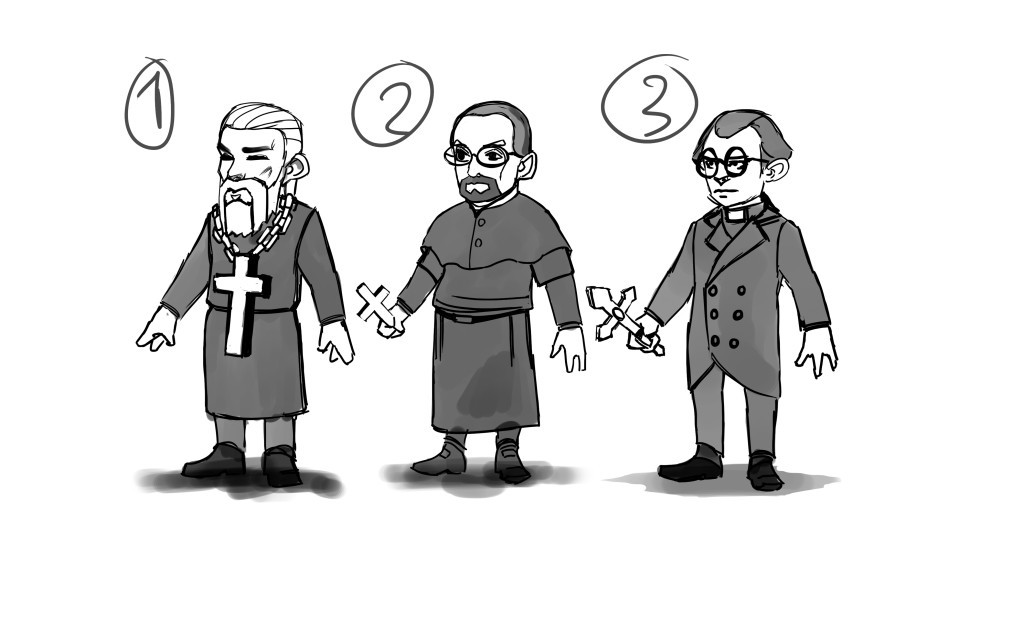 We wish you all a great summer!

We developed the prototype of Spooked with XNA. However, we also want to release Spooked for mobile platforms as Android and iOS. Therefore, we decided to use Game Maker by Yoyo Games instead. This tool lets coders, artists and designers work more streamlined. It didn’t take long to recreate Spooked with Game Maker.